This article is from the http://www.saudiwoman.wordpress.com site which I have just read up on – please check on this link for more superb articles and help spread the site.

The man of the hour 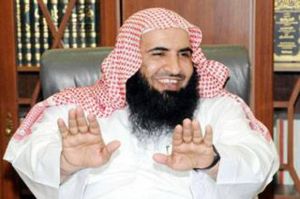 Great controversy is brewing in Saudi Arabia and it all starts and ends with Sheikh Ahmed Al Ghamdi. Al Ghamdi is a 47 year old PhD holder in administration and strategical planning and also has spent 15 years studying Islam.

The whole issue began when Okaz Newspaper published a lengthy article last December written by Sheikh al Ghamdi in which he proclaimed that there is no such thing as gender segregation in Islam. He stated that what we are at today is based on extremism and cultural considerations. Moreover he points out that the very thing that we have been prohibiting is practiced in most Saudi households with the presence of maids. Anyhow this is not the first time that a Saudi sheikh has written about the illogicality of gender segregation. Sheikh Ahmed Bin Baz wrote about it and so did the judge Eissa al Ghaith. Although both got an earful, their articles were eventually forgotten. The difference with Sheikh al Ghamdi is that he is head of the Makkah PVPV commission. And as everybody knows, maintaining gender segregation is one of the highest callings of the PVPV. So for Sheikh al Ghamdi to come out and say that this form of segregation is Islamically baseless, it becomes an issue of conflict of interests. And then he tops his gender segregation article with another article on not banning shops from business during prayer time. Going around shopping areas to insure that they close during prayer is another main component of a PVPV member’s job description. As one journalist points out, Shiekh al Ghamdi may be free to write what he thinks but as an employee of the PVPV, he shouldn’t be publishing things that go against their policies and practices.

For the PVPV and the whole ultra conservative majority, to have one of their own, someone who they had given a high position in their hierarchy go against their beliefs is a slap in the face. Attacks on Shiekh al Ghamdi’s character, credentials and articles were on every one of their TV channels and papers. Some claimed that he was paid to write what he wrote. And then a group of influential muttawas got together and decided to invite Sheikh al Ghamdi to a televised debate. He came onto to the show and it struck me as more of a trap. Insults were thrown at him right and left. The opposing debaters instead of discussing al Ghamdi’s points kept calling him a mere accountant who doesn’t know what he’s talking about. Another claimed that al Ghamdi was blasphemous towards the Prophet (PBUH). The call-ins were a confirmation of my belief that the whole show was a set up. Again a bunch of sheikhs called in and insulted al Ghamdi and then HRH prince Khalid bin Talal called demanding that al Ghamdi be fired from his PVPV post and called him an embarrassment to Saudi Arabia. This lead to a flurry of news organizations reporting that a PVPV sheikh was fired for not believing in gender segregation. The next day it was learned that Al Ghamdi was still at his PVPV post.

The following week sheikh al Ghamdi was again invited to the show to debate the issue. The second show was an improvement on the first. The debaters were given three uninterrupted minutes to state their case and everyone tried to avoid personal insults. The call-ins too were more balanced with some calling in in support of al Ghamdi. On both shows I was impressed by how confident and articulate al Ghamdi was. In comparison, the other two shiekhs seemed baffled and unprepared.

However the outcries against him haven’t subsided and his job at the PVPV is still up in the air. The afternoon of April 25th, a statement was released to the newspapers that a routine shuffle has resulted in the demotion of sheikh al Ghamdi, and then a couple of hours later all newspapers were requested not to publish the statement. And up to the writing of this post no news of whether or not Sheikh al Ghamdi will be allowed to keep his job has come out.