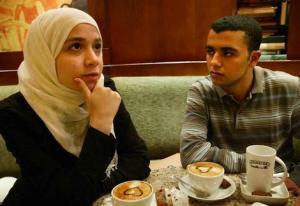 The brushfire uprisings that are sweeping across the Middle East raise the question: Is democracy replacing Islam as the perceived solution to the problems of Arab societies?

The most striking change in the demand of the protesters in all the uprisings, from Libya to Bahrain, deserves emphasis. The demonstrators are not demanding the establishment of an Islamic state. They are not chanting the revered slogan, “Islam is the solution.” Instead, they are calling for democracy.

This transformation of popular demand is unprecedented. The credo “Islam is the solution” has been used by Islamists around the world ever since the Muslim Brotherhood first used in its parliamentary electionscampaign of 1987 and in all its subsequent campaigns in 1995, 2000, 2005 and 2010. Surprisingly, theBrotherhood did not use it in the most consequential revolt in Egyptian history. Why?

The senior leadership of the group reportedly instructed the younger brothers to forgo its use. They likely calculated that the slogan, which is perceived to be anti-democratic, would be out of place in an overwhelmingly pro-democracy uprising.

The popular and widespread demand for democracy in the Arab world today could mean the dawn of a future democratic era. The people might be finally coming to believe that democracy could help resolve many of their multifaceted and complex problems, because the nationalist autocratic rulers have failed them for decades, just as radical Islamist leaders fail them today in promising the re-establishment of utopian rule of the caliphate in the world. If so, this hopeful scenario has important implications in both theory and in practice.

In theory, the “clash of civilizations” hypothesis could become obsolete. Proposed in 1993, a year after the first terrorist attack on the World Trade Center by an Islamic fundamentalist group, this view posited Islamic civilization as the primary threat to the West in the 21st century. But if the Arab world should go democratic, then such a threat would most likely be greatly diminished, since democracies are frequently more peaceful.

In practice, progress toward democracy would greatly undercut the appeal of al-Qaida and its terrorist affiliates. It could also significantly benefit Islamic reformist groups, especially the moderate wing of theMuslim Brotherhood in Egypt, which claims that the Ikhwan (the Brotherhood) does not seek to establish an Islamic state. This enlightened stance would make it easier for secular groups to collaborate with pragmatic Islamists.

Success toward democracy in Egypt could also benefit the Brotherhood’s moderate offshoot, the IslamistWasat (Centrist) Party, which could emerge as the most important Islamist group willing to cooperate with secular groups, especially the veteran nationalist-liberal Wafd Party.

Transition to democracy at the moment is focused on Tunisia and Egypt; their leaders have fallen from power while their systems remain in place, despite the change of their prime ministers, tainted by ties to the old regimes. Reformists, however, are having difficulty in creating a modicum of consensus on what constitutes the common good for Tunisia. The head of the reform commission warned on Feb. 21 that the country risked falling into “anarchy and we know that anarchy always leads to dictatorship — theocratic or military dictatorship.”

So far Egypt seems to be avoiding the risk of military or theocratic dictatorship. The military and civilian leadership that controls Egypt announced major reform steps on Feb. 21 to reassure Egyptians and the outside world that it would move quickly to civilian rule, although many Egyptians complain that the military is procrastinating in not lifting the emergency law.

The military-civilian leadership is also acting to minimize the risk of theocratic dictatorship in Egypt. For example, the Armed Forces Council signaled strongly on Feb. 15 that the Muslim Brotherhood, which still calls for the creation of an Islamic state in the Arab world, could no longer be barred from Egyptian politics. Legal restrictions would have to be lifted, however, before the group can register as a legitimate political party. Moreover, the council included Sobhi Saleh, a moderate Islamic thinker, to represent the Muslim Brotherhood on a panel to amend the constitution that will be put to a referendum later in the year.

The future, however, is unpredictable, despite these encouraging signs. It is often said that the process of transition to democracy is “messy.” Thomas Jefferson put it more elegantly in remarks to his old friendLafayette. He wrote him on April 2, 1790, not to expect transition “from despotism to liberty in a feather bed.”

The transition to democracy in the Middle East is a profound challenge for the United States because never before had the entire region been swept by popular demands for freedom and democracy. Obviously, only the people of the Middle East can ultimately decide the outcome of the transition from the old autocratic to a new democratic political order, but the United States has a significant role to play.

The Obama administration would be well advised to make it clear to the Arab people and the outside world that it pursues an all-inclusive strategy in regard to peaceful political change in the Arab world, including the process of transition to democracy, regardless of religion, race, and gender.

The exclusion of the Islamists or for that matter any group from participation in the emerging Arab politics would ensure their radicalization. Those who fear that the Muslim Brotherhood would hijack the Egyptian revolt as the Islamists did the Iranian Revolution should realize that exclusionist strategies could result in a self-fulfilling prophecy.

Democracy, Not Islam, is the solution?