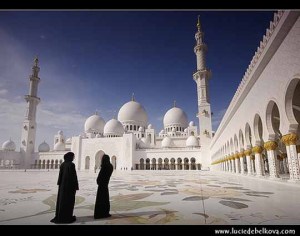 Islam is a widely-misunderstood religion. Those who are unfamiliar with the faith often have misunderstandings about its teachings and practices. Common misconceptions include that Muslims worship a moon-god, that Islam is oppressive against women, or that Islam is a faith that promotes violence. Here we bust these myths and expose the true teachings of Islam.

Some non-Muslims mistakenly believe that Allah is an “Arab god,” a “moon god,” or some sort of idol. Allah is the proper name of the One True God, in the Arabic language. The most fundamental belief that a Muslim has is that “There is only One God,” the Creator, the Sustainer — known in the Arabic language and by Muslims as Allah. Arabic-speaking Christians use the same word for the Almighty.

In the Qur’an, stories about the life and teachings of Jesus Christ (called ‘Isa in Arabic) are abundant. The Qur’an recalls his miraculous birth, his teachings, and the miracles he performed by God’s permission. There is even a chapter of the Qur’an named after his mother, Mary (Miriam in Arabic). However, Muslims believe that Jesus was a fully human prophet and not in any way divine himself.

More: Jesus in the Qur’an

3. Most Muslims are Arabs

While Islam is often associated with Arabs, they make up only 15% of the world’s Muslim population. The country with the largest population of Muslims is Indonesia. Muslims make up 1/5 of the world’s population, with large numbers found in Asia (69%), Africa (27%), Europe (3%) and other parts of the world.

Most of the ill-treatment that women receive in the Muslim world is based on local culture and traditions, without any basis in the faith of Islam. In fact, practices such as forced marriage, spousal abuse, and restricted movement directly contradict Islamic law governing family behavior and personal freedom.

More: Books About Women in Islam

Terrorism cannot be justified under any valid interpretation of the Islamic faith. The entire Qur’an, taken as a complete text, gives a message of hope, faith, and peace to a faith community of one billion people. The overwhelming message is that peace is to be found through faith in God, and justice among fellow human beings. Muslim leaders and scholars do speak out against terrorism in all its forms, and offer explanations of misinterpreted or twisted teachings.

More: The Qur’an on Terrorism

6. Islam is intolerant of other faiths

Throughout the Qur’an, Muslims are reminded that they are not the only ones who worship God. Jews and Christians are called “People of the Book,” meaning people who have received previous revelations from the One Almighty God that we all worship. The Qur’an also commands Muslims to protect from harm not only mosques, but also monasteries, synagogues, and churches — because “God is worshipped therein.”

More: Christians in the Qur’an

7. Islam promotes “jihad” to spread Islam by the sword and kill all unbelievers

The word Jihad stems from an Arabic word which means “to strive.” Other related words include “effort,” “labor,” and “fatigue.” Essentially Jihad is an effort to practice religion in the face of oppression and persecution. The effort may come in fighting the evil in your own heart, or in standing up to a dictator. Military effort is included as an option, but as a last resort and not “to spread Islam by the sword.”

More: What is Jihad?

8. The Quran was written by Muhammad and copied from Christian and Jewish sources

The Qur’an was revealed to the Prophet Muhammad over a period of two decades, calling people to worship One Almighty God and to live their lives according to this faith. The Qur’an contains stories of Biblical prophets, because these prophets also preached the message of God. Stories are not merely copied, but the oral traditions are referred to in a way that focuses on the examples and teachings that we can learn from them.

More: Before You Read the Qur’an

9. Islamic prayer is just a ritualized performance with no heartfelt meaning

Prayer is a time to stand before God and express faith, give thanks for blessings, and seek guidance and forgiveness. During Islamic prayer, one is modest, submissive and respectful to God. By bowing and prostrating ourselves to the ground, we express our utmost humility before the Almighty.

More: How to Pray

10. The crescent moon is a universal symbol of Islam

The early Muslim community did not really have a symbol. During the time of the Prophet Muhammad, Islamic caravans and armies flew simple solid-colored flags (generally black, green, or white) for identification purposes. The crescent moon and star symbol actually pre-dates Islam by several thousand years, and wasn’t affiliated with Islam at all until the Ottoman Empire placed it on their flag.