With reports that the Rev. Fred Phelps Sr. dead, many quipped the Westboro Baptist Church, the very organization he founded, would picket his funeral as they have so many others in the past. It might sound like a joke, but apparently it’s the real deal: The WBC will hold a demonstration at the funeral of their former pastor. 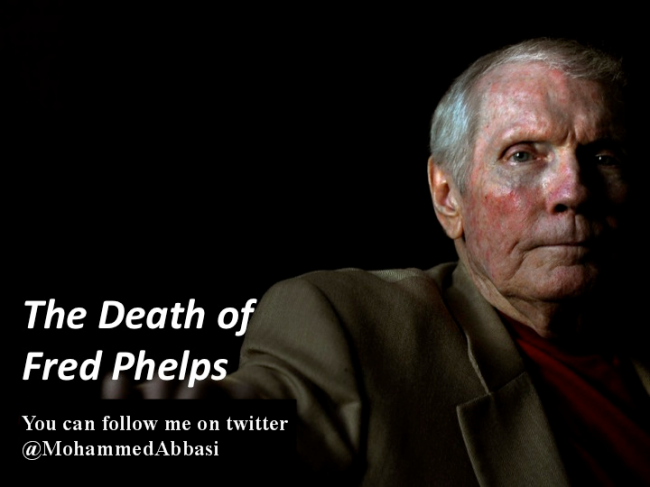 Phelps Sr., 84, got back in the news Sunday when his estranged son Nathan posted a note to Facebook saying the pastor is currently in hospice care and was excommunicated from the organization for reasons that remain unclear. As twisted as it may be, his daughter Margie (who is a part of the WBC) said on Twitter the hate-fueled organization would definitely be at his funeral, if only to picket.

“My dad Pastor Fred Phelps is a hell bound f*g enabling whore,” she shockingly wrote on Twitter Sunday evening. “#Westboro Baptist Church to protest this whores Funeral.”  Margie had nothing but revulsion to spread in regards to her father’s ailing health. She added he is “now a hell bound whore.”

Speculation as to why he was excommunicated is rampant on the Internet, with some assuming the WBC members found out Phelps was actually gay and others thinking he might have had a change in heart as his health declined. There’s no definite answer as of now.

Despite Margie and Nathan’s public statements that Phelps Sr.’s passing is imminent, the WBC issued a “Recent Media FAQ” that denied the former pastor was not doing well. It said he “is a person of advanced age, and such people sometimes have health issues.” But the organization seemed annoyed at the insinuation that their founder was “near death” since it’s “highly speculative” and “foolish considering that all such matters are the sole prerogative of God.” As far as Phelps being “excluded” from fellowship, the organization succinctly replied: “Membership issues are private.”

A spokesman for the WBC said Phelps Sr. was in hospice care, but would not remark any further. “We don’t owe any talk to you about that,” Steve Drain told the Topeka Capital-Journal. “We don’t discuss our internal church dealings with anybody. It’s only because of his notoriety that you are asking.”