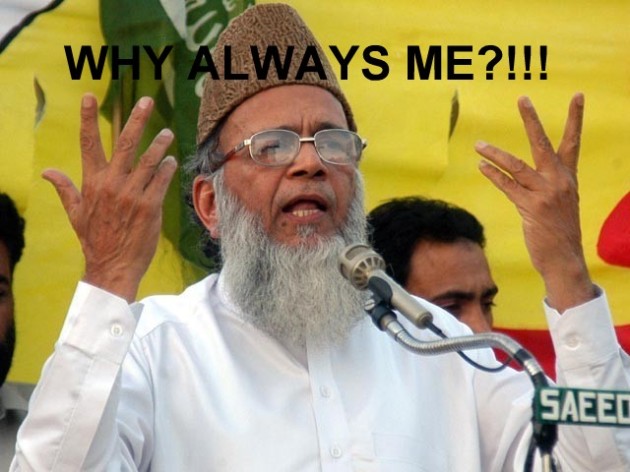 At a meeting on January 10, 1971, Syed Munawar Hasan, leading a pack of young turks, launched a frontal attack on Syed Abul Ala Maudoodi, the founder and ameer (chief) of the Jamaat-e-Islami (JI), blaming him for the party’s rout in the country’s first democratic elections. Because of his move, the JI was thrown into turmoil leading to Maudoodi’s resignation the following year.
Forty-three years later, as the Jamaat kicks out Munawar Hsasan from the office of ameer, he has defaced Maudoodi’s party, leaving it in a far worse shape than the founder had in 1972, not only in electoral and political terms but also in terms of public perception and spreading the message of peace for which the Jamaat finds less and less time now. There is hardly any doubt that Pakistan’s most influential religio-political party will have to deal with his poisonous legacy for many years to come and the damage may even prove permanent.

Though glossed over by the JI, Munawar Hasan’s defeat in the party’s elections for ameer is a remarkable event for a party that has organised itself along the multi-tiered structure of a communist organisation and where dissent against the ameer is rare. According to Vali Nasr, writer of ‘The Vanguard of the Islamic Revolution’, an influential book on the JI, the system of party elections favours the incumbent, “as members are not likely to unseat someone who is both administrative head of the party and its spiritual guide. No ameer to date has been voted out of office”.

Though the Jamaat did vote out an ameer for the first time in its history, the party, particularly its Shura, the most important decision-making body after the chief, utterly failed to rein in its chief who behaved more like a renegade throughout his term in office, harming not only the party but also the country, its institutions and democracy. At least a part of the reason lies is the fact that the bureaucracy of the party and its office holders are paid by the Jamaat and often rely on it for their sustenance.

In the Jamaat, loyalty is not only about the concept of itaat-e-ameer – obedience to the ameer only – but also about job security. There is a common joke in the party, ‘main muashi taur par jamaati hoon’ ( I am a Jamaati for financial reasons).

Many will remember Munawar Hasan for his outrageous statements, for example asking all Muslims living in the west to migrate or advising rape victims not to pursue justice if the attack was not witnessed by four men. However, what made him stand apart from his predecessors was his unqualified support for all kind of violence and terrorism carried out in the name of Islam. In this he crossed the Jamaat’s time-honoured policy of playing by the constitution.

The Jamaat did not acquire a taste for violence and private jihad under Munawar Hasan. The party’s student wing developed a penchant for use of force under Maudoodi himself and it was also under Maudoodi that the East Pakistan wing of the Jamaat raised two militias – Al Badr and Al Shams, which Bangladesh accuses of committing atrocities during the separatist struggle.

Though the JI fought Ayub’s dictatorship, it acquired the unenviable title of martial law’s B team during Ziaul Haq’s regime and played a key role in the Afghan jihad under the leadership of Mian Tufail Mohammad. Qazi Hussain Ahmad, general secretary and later ameer of the party, was at the centre stage of the Jamaat’s involvement in the Afghan Jihad and was also instrumental in taking jihad from Afghanistan to Kashmir. He told me once that it was he who arranged military training of the very first group of Kashmiri mujahideen who had fled from Indian Occupied Kashmir to Pakistan in the wake of the rigged elections of 1987 that proved a turning point in the valley.

He initiated mass mobilisation to enlist Pakistani youth for jihad in Kashmir using the slogan ‘Hum jashne Kabul mana chukay, ab aao chalo Kashmir chalain’. (We have celebrated our victory in Kabul, let’s go to Kashmir now). Interestingly, even when he was sending thousands of Pakistani young men to become fodder for jihad, his own son was studying at Boston University.

One of the most enduring images of the period is that of Qazi Hussain Ahmad alongside Mast Gul, hand in hand, being greeted by thousands of supporters during a drive from Chakothi to Muzaffarbad and at public meetings in August 2005. Earlier that year, Mast Gul and his group of mujahideen belonging to the JI affiliated Hizbul Mujahideen had entrenched themselves at the 14th century shrine of Charar-e-Sharif in the Budgam district of Jammu and Kashmir.

In a bid to flush them out, the Indian army had launched an operation that resulted in two-month-long standoff. The drama ended after the shrine was gutted. Though 20 jihadis, two army men and five civilians were killed, Mast Gul was able to escape to Pakistan. For the Jamaat, it was an achievement of unparalleled proportions that was celebrated on a large scale.

Unfortunately, the story of Mast Gul did not end here. On February 5 this year, Mast Gul appeared in a terrorist propaganda video sitting next to the Peshawar district chief of the TTP, Mufti Hasaan Swati, who claimed responsibility for a suicide attack that left nine people dead at a Peshawar hotel. Hasaan Swati disclosed that Gul, whom he described as a TTP commander for Peshawar, had planned the suicide bombing under his instructions.

Mast Gul’s transformation also symbolises the change the JI has gone through under Munawar Hasan’s leadership. Despite Qazi Hussain Ahmad’s involvement in the Afghan jihad, which he called Umul Jihad – mother of all jihads, which gave birth to innumerable offspring , he not only kept himself away from violence within the country but also tried to play an active role in ending sectarian bloodshed by forming the Milli Yakjehti Council in 1995 that brought warming factions to the negotiation table.

The council made armed sectarian groups sign peace agreements that were soon ignored. Though Qazi adopted an ambivalent stance towards Taliban, he himself became a target of suicide attacks in Mohmand agency in November 2012.

Munawar Hasan, however, turned the Jamaat into a political wing of the Taliban. By doing so, he also defied the Jamaat’s time honoured policy of playing by the constitution, eschewing violence within the country and accepting the army’s definition of strategic issues. Munawar’s closeness to the Taliban is clear from a letter written by Umar Khalid Khorasani, the head of the TTP’s Mohmand Agency chapter to Sirajul Haq, the new ameer of the JI.

Khorasani, who had recently claimed responsibility for beheading 23 Frontier Corps soldiers, wrote: “Our destination is the same but the difference is in the modus operandi to achieve it….It is hoped that you (Sirajul Haq) would carry forward the mission of Syed Munawar Hasan without making any compromise’.

Will the new JI chief, slightly less militant but far more pragmatic than Hasan, follow Khorasani’s advice and stick to the disastrous mission of Munawar Hasan or will he carve a different path for the Jamaat, turning it into a moderate Islamist party once again? The answer will unfold in the next few years and along with it the destiny of the Jamaat-e-Islami founded by Maudoodi in 1941.