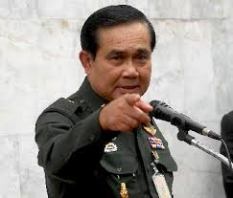 Thailand’s Army Chief General Prayuth Chan-ocha declared a coup, taking control of the government two days after invoking martial law and bringing political opponents into talks aimed at finding a compromise to six months of anti-government protests.Prayuth said the army had to restore order and push through reforms to prevent further loss of life and stop the political conflict from escalating. The Peace and Order Maintaining Command has seized power from the caretaker government, he announced in an address broadcast on all television channels. “In the interest of rule and order, we are taking over powers,” Prayuth said. “Please do not panic and carry on with your daily activities.” The Southeast Asian nation’s 12th military coup since the end of absolute monarchy in 1932 appears to indicate that the military has been frustrated in its attempts to mediate a resolution of the political between supporters of former Prime Minister Thaksin Shinawatra, who was ousted in a 2006 coup d’etat, and opponents backed by the establishment. More than six months of bitter political deadlock have led to least 28 deaths and 700 people injured. The broadcast came shortly after soldiers took Suthep Thaugsuban, the leader of anti-government protests, out of the meeting that was aimed at finding a solution to a drawn-out power struggle. Key figures in the government and opposition have reportedly been detained at the Army club in Bangkok. All government agencies are to continue working normally, no weapons are allowed to be transported around the country, and foreign relations are not affected, by the army’s move, Prayuth said. “In order for the situation to return to normal quickly and for society to love and be at peace again … and to reform the structure of the political, economic and social structure, the military needs to take control of power,” Prayuth said in the announcement. The government and “red shirt” supporters of self-exiled Thaksin and his younger sister Yingluck Shinawatra, the perceived proxy of the former premier, want an election as soon as possible, while the anti-government protesters have demanded a “neutral” interim prime minister to oversee electoral reforms to end what they see as corruption of politics. Thailand’s Constitutional Court on May 7 dismissed Yingluck from office as caretaker prime minister for transferring a top security official to pave the way for the promotion of Thaksin’s former brother-in-law to national police chief in a move the court ruled as illegal. Prayuth warned last week the military might have to step in after a gun and grenade attack on anti-government protesters in which three people were killed and about 20 wounded at the historic Democracy Monument.