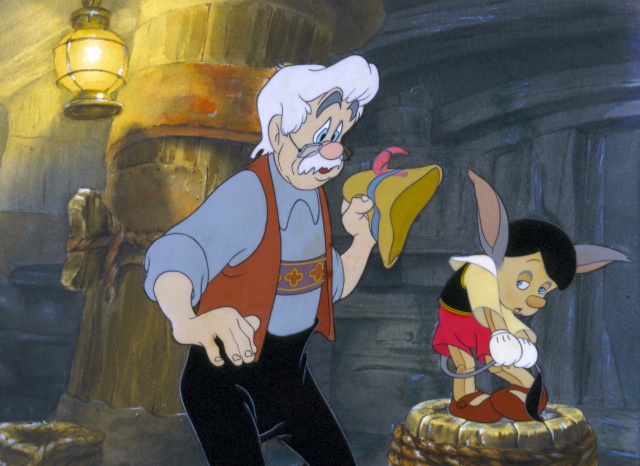 It is said that once a pious man heard about a community that worshipped a tree instead of Allah. He picked up an axe and went off, intent on chopping the tree down. Satan met him on the road in the form of an old man and said to him: “Where are you going, and what do you want.”

The man replied: “I want to cut down the tree that people are worshipping instead of Allah.”

Satan said: “What does this have to do with you? You left your own worship to involve yourself with this. If you cut down their tree, they will find something else to worship.”

Satan said: “I prohibit you to cut it down!”

The man wrestled Satan to the ground and sat on his chest. Satan said: “Let me go so I can speak to you.” When the man did so, Satan said to him: “Allah has not placed this burden upon you. Had He wished, he has many servants on the Earth he could order to cut it down.”

Satan then asked: “Would you let there be something between me and you that is better than what you want?”

Satan said: “You are a poor man. Maybe you would like to provide something in charity for your brothers and your neighbours and become independent of the people.”

Satan said: “Desist in what you are doing, and I will place two gold coins under your pillow every night. You can use them to support your family and spend something in charity. This is better for you and for the people than cutting down that tree.”

The man thought about it and said: “What you say is true. Swear to me on what you say.” So Satan swore an oath to him, and the man returned to his personal worship. When he woke up the next morning, he found two gold coins under his pillow. He took them. The same thing happened on the second day.

When he woke up on the third morning, he did not find the coins under his pillow. He became angry, picked up his axe, and went out intent on chopping down the tree. Satan met him in the form of the old man he assumed before. He asked: “Where are you headed?”

The man replied: “I am going to cut down that tree.”

Satan said: “You do not have the ability to do so.”

The man then reached out to strike Satan, but Satan struck him down instead and said: “If you do not desist, I will slaughter you.”

The man cried: “Let me go and tell me how you overpowered me.”

Satan said: “When your anger was for Allah’s sake, Allah submitted me to you and brought me down before you. But now, you are angry for your own sake on account of worldly desires, so I am able to subdue you.”

This is, of course, just a story, but like any good fable, it has an important moral.

When we do things for the sake of the people and abstain from them for their sake, we cease doing so for Allah’s sake. This is why the Prophet said: “The thing I fear most for you is the lesser polytheism… which is showing off.” [Musnad Ahmad]

This does not mean it is wrong for a believer to enjoy the praise of others. Showing off is only where the intention behind the person’s action is for other than Allah, so that if the person was not being seen by others, he or she would not act. There are many ways to show off:

1. Showing off in one’s belief. This is hypocrisy, where a person makes a public show of faith while concealing their real disbelief.

3. Showing off through what one says. Prophet Muhammad (peace be upon him) said: “Whoever calls attention to himself, Allah will call attention to how he really is.” [Sahīh al-Bukhari and Sahīh Muslim]

This includes quoting wise sayings, exhorting people to righteousness, and quoting hadith to bolster one’s “pious” reputation. It also includes moving one’s lips to give the appearance of being engaged in God’s remembrance.

4. Showing off through one’s deeds. This includes spending an extra-long time standing, bowing or prostrating in prayer when others are watching.

5. Showing of through association. This is like making sure to be seen with prominent scholars and pious people in order to be associated with them in the people’s eyes.

In all cases, the crux of the matter is not the action itself, but what motivates the action in the first place. The motivation for showing off stems from either a desire for praise, an aversion for people’s low opinion, or a covetousness for what other people possess. If something of this nature comes into a person’s heart while the person is already engaged in an act of piety, then it does not nullify the blessings of that act.

Some people abstain from doing good deeds fearing that they will fall into the sin of showing off. This is a mistake that leads people to lose out on a lot of virtue and many blessings. As long as your original intention is for Allah, then you should go forward with the good deed you intend. Do not let fear of showing off keep you from doing something good.

A student at an early stage in his studies rushes ahead and starts issuing Islamic legal verdicts, heads a study circle, and walks about with a regal demeanor. He has a hard time admitting when he does not know something. He speaks as if he is a leading authority, making statements like:

“In my considered opinion…”

“What has become evident to me…”

“I have come to the overwhelming conclusion that…”

“What a person’s heart feels secure with is…”

At the same time, he is harsh and long-winded when he comes across someone else’s mistake, though he cannot tolerate their pointing our any error of his.

Another person gives preference to carrying out public duties at the expense of his own individual obligations. He might even spend excessive time engaged in things that the community might only rarely need, simply because they make him look important.

A third person is overjoyed with any chance he has to argue and debate with people. In the heat of an argument, he is quick to challenge people to invoke Allah’s curse upon whichever one of them are in the wrong. Often, his point of contention is no more than hair-splitting and his only purpose is to publicly expose his opponent as wrong or misguided. It infuriates him when he knows his opponent has made a good point. On the other hand, if his opponent concedes a point to him, he says: “Now you have come to my point of view and my way of thinking” as if he has had a monopoly on the truth all along and decides who can partake of it with him.

In almost all cases, what the Prophet said about debates holds true: “Base motives are obeyed, passions are followed, and each holds fast to his own opinion.” [Sunan Abī Dāwūd and Sunan al-Tirmidhī]

A wise man was once asked: “Why is it that the words of the Pious Predecessors are more beneficial than what we say?”

The wise man replied: “The words of the Pious Predecessors are better than our words, because they spoke to promote Islam, please Allah, and guide people to salvation, whereas we speak to promote ourselves, please the people, and achieve worldly success.”

Some people like to dig up strange opinions and resurrect old arguments to make it seem like they are resuscitating a Sunnah that has been forgotten or neglected. Our scholars had a different attitude about such things. They warned against strange and unusual opinions that show themselves in their very strangeness to be suspect.

It is possible, nevertheless, to go to the opposite extreme. When a well-known custom or tradition is called into question, some people come forward as self-proclaimed defenders of tradition, hoping to earn a prominent position in society by doing so, even if they know that tradition is misguided, does not serve the public welfare, or is contrary to the teachings of Islam.

Another mode of conduct in this vein is to seek after a lot of followers, pit people against one another, erect obstacles to reconciliation, and stake loyalty on adherence to a bunch of secondary controversial opinions.

Al-Dhahabī said: “You can be an oppressor and believe that you are the one who is oppressed. You can be consuming unlawful wealth and fancy yourself to be abstentious. You can be a sinner and think you are righteous and just. You can be seeking religious knowledge for worldly benefit but see yourself as doing so for Allah’s sake.” [Siyar A`lām al-Nubalā’]

Abū Dāwūd, speaking about his Sunan, told Imam Ahmad: “This is something I have done for Allah’s sake.”

Ahmad said to him: “As for saying it is for Allah’s sake, that is a serious claim. Rather say: ‘This is something my heart has been made to incline towards, so I did it’.”

It is also related as something Ahmad admonished himself with. Indeed, identifying your inner motives is one of the subtest but most crucial ways of being honest.