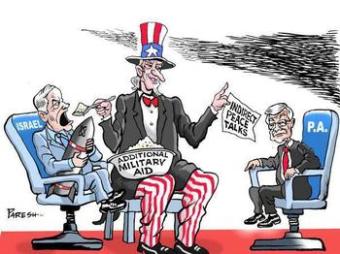 To understand how self-defeating the US latest “peace process” drive has been, one only needs to consider some of the characters involved in this political theater. Martin Indyk in particular stands out as a testament to how inherently futile the exercise is. Indyk, a former US ambassador to Israel, was selected by Secretary of State John Kerry for the role of special envoy for negotiations between Israel and the Palestinian Authority. Under normal circumstances, Kerry’s selection might have appeared rational. Former ambassadors often possess the necessary expertise to navigate challenging political landscapes in countries where they previously served. But these are not normal circumstances, and there are reasons why Indyk can hardly be seen a diplomat in this case. As the US-sponsored peace process began to falter, Kerry dispatched his envoy to Jerusalem. On Friday, April 18, Indyk took on the task of speaking to both sides separately. International media depicted the event as a last-ditch effort to revive the talks and to help bridge the gap between the Palestinian Authority President Mahmoud Abbas and Israel’s Prime Minister Benjamin Netanyahu.