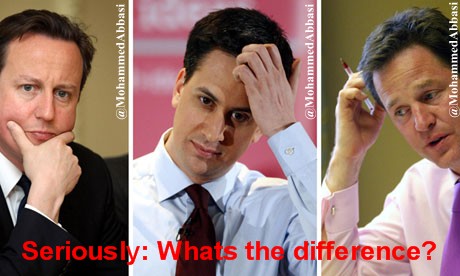 So what type of voter are you? Pollsters Populus have come up with a new way of tapping into the mind of the electorate. You can take the test here – but first let us explain what it is all about.

Worcester woman. Mondeo Man. Political parties love slicing and dicing the electorate into chunks, all the better to target them for their votes.

The technique is called segmentation and – like many political tools – has been perfected in the United States.

Gone are the days when the public was segmented by simple things like their cars or postcodes.

Now the pollsters are reaching into the minds of voters to profile their values.

The American author Sasha Issenberg wrote about how it was done by the Bush and Obama campaigns for his book The Victory Lab.

“It works at the front end of the campaign and helps the politicians and their staff visualize who their voters are,” he says.

“It means they can craft TV ads, speeches and photo ops that appeal to the groups they need to win over.”

The BBC has been given access to the model used in the UK by the polling firm Populus, whose senior staff have advised the Tories on electoral tactics. They break the country into six segments, based on attitudes.

Here’s how their managing director Rick Nye describes the groups:

1. Comfortable Nostalgia: “They tend to be older, more traditional voters who dislike the social and cultural changes they see as altering Britain for the worse.”

2. Optimistic Contentment: “Confident, comfortable & usually on higher incomes they are prudent & tolerant but think Britain is a soft touch.”

3. Calm Persistence: “Often coping rather than comfortable, they hope rather than expect things to get better.”

4. Hard-pressed Anxiety: “Pessimistic & insecure, these people want more help from government and resent competition for that help particularly from new-comers.”

5. Long-term Despair: “Many are serial strugglers; angry & alienated they feel little or no stake in the country or that anyone stands up for them.”

6. Cosmopolitan Critics: “Generally younger, more secular and urban-based, worried about growing inequality & the general direction the country is going in.”

Mr Nye said: “Populus has taken the latest profiling techniques used in the last US presidential election and now imported by the main political parties over here and applied them to the British electorate.

“The result is a series of voter types based on different attitudes, outlooks and values not just the traditional dividing lines of class or geography.

“These voter ‘segments’ as pollsters call them form the building blocks which all parties will have to try and work with to assemble the largest coalition of support they can muster at the next election.”

But what does it mean for party politics?

If we examine the chart showing how different groups voted in the general election of 2010, some trends stand out.

The more comfortable groups tend to vote Conservative. The less secure tend to opt for Labour. The Liberal Democrats grab chunks of all of them. UKIP are appealing to the nostalgic group, it seems.

The Daily and Sunday Politics and Radio 4’s the World At One are going to work with Populus using this model to assess whether the parties’ messages are reaching their intended targets.

And because the parties are all being influenced by these new techniques, it also means we’ll get the same sort of intelligence they are getting.

It looks like the next election will be won among the Calm Persistence group. If that’s you, then prepare to be bombarded by messages tailored to appeal: you are Worcester Woman and Mondeo Man – 2014 edition.